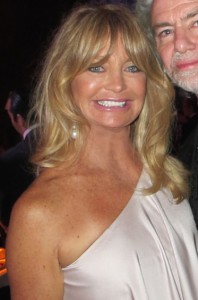 As a long time meditation practitioner and advocate, Goldie Hawn says that she really found meditation to be a great way to help with the stress of her new found fame back in the 70’s.  Hawn says that she had really loved dancing and that she never thought that her career would take the path that it has.  Experiencing panic attacks and trying to deal with crowds, etc. lead her to finding that meditation helped to really center her.

She has also created a foundation (the Hawn Foundation) and program called MindUp that helps teach children about how their brain’s work and how to control emotional impulses by taking “brain breaks”.   She has also written a book about her meditation practice and recommended practice called “10 Mindful Minutes”.  It is great to see that Hawn attributes a lot of her contentedness and attitude to meditation and is willing to share her experience and her expertise with the world.

Shake hands with your brain. Hawn insists that if we know a bit about how the brain works, we can truly grasp why meditation is not just for those with a fondness for Birkenstocks and patchouli. “Familiarize yourself with the parts of your brain and their function,” Hawn says. “You will see that the benefits of meditation aren’t just in your head. They’re as physiological as the benefits of exercise on your muscles.” For example, a 2011 study found that people who meditated 30 minutes a day for eight weeks had increased gray matter in the hippocampus, an area critical to memory and learning, and a reduction of gray matter in the amygdala, a region associated with anxiety and stress. There were no changes in the brain matter of a control group that didn’t perform mindfulness meditation.

Decide you want to meditate. Making something a priority for your well-being is half the battle. Take a little time to just listen to your own breathing. “It will probably be a bit irregular,” Hawn says. Gradually, you’ll learn to regulate your breathing and your brain.

Give yourself at least three “brain breaks” a day. Worried that meditating takes too much time? Research shows that meditating for 3 minutes 5 times a day is as beneficial to the body as doing it in a single 20-minute block of time.  (Read more)

She also says that over the years she has studied many different religions.  While Hawn was brought up Jewish and considers that her ‘religion’, her study has brought her to the understanding that all people are really praying to the same God.  The development of the spiritual life is what is important when it comes to any practice or religious adherence.

Meditation is a welcome addition to any spiritual practice or affiliation and Hawn also says that understanding how your brain works is important in your understanding of how mediation helps you in every aspect of your life.  At 67 years of age, she is a wonderful example of how meditation can anchor your life if you allow it to.