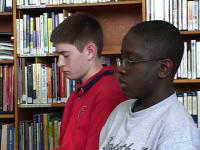 Meditation for ADHD has some clear benefits that are hard to ignore. A recent study done at the Royal Hospital for Women in Sydney with the Institute of Psychiatry in the King’s College in London, UK showed that children who had ADHD showed marked reductions of the symptoms of ADHD after being taught how to meditate with the Sahaja Yoga Meditation. On the other hand, those who were given stimulant medication showed improvement, although there’s reason to worry over the long-term effectiveness of such medication. Parents of children with ADHD also expressed their interest in non-pharmalogical treatment options.

Another benefit  of meditation is that children who were taught to meditate improved their relationship with their parents, not to mention that their self-esteem was enhanced.

This pioneering study suggests that meditation is clearly a promising non-pharmacological treatment option for children with ADHD that needs to be further explored. (More here)

Parents of children with ADHD should definitely consider teaching meditation to their kids. There’s nothing to lose, and everything to gain, in the long run.