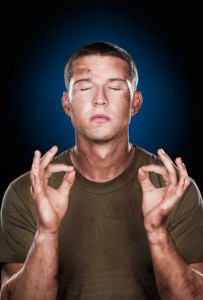 Whoever said that meditation isn’t for the strong surely have not heard of just how helpful it has been to our Marines. You heard that right—meditation has been invaluable in replenishing the Marine Corps.

After the US military’s operational tempo (OPTEMPO) has word down the military personnel, particularly the Marine Corps, which has been frequently deployed to Afghanistan Iraq, senior Marine brass had to find a way to somehow relieve the stress and replenish the energy of the Marines. After all, their repeated deployments have certainly caused a tremendous amount of pressure on them. With that, meditation was introduced to the Corps. Sure, they weren’t receptive to the idea of meditation at all, but they gave it a shot. With that, what are the surprising results of meditation among the country’s defenders?

Staff Sgt. Nathan Hampton perhaps illustrated best how most of the  initially reacted to the meditation techniques. After undergoing combat exercises and intense physical training at Camp Pendleton, they were also given instructions regarding meditation techniques. He said, “A lot of people thought it would be a waste of time. Why are we sitting around a classroom doing their weird meditative stuff?” The initially harsh reaction, however, was quelled, when most of them realized over time that they were more relaxed, and were able to sleep better. Moreover, it also allowed them to think clearly in stressful situations.

Owing to the positive feedback of the meditative instruction, the Mindfulness-based Mind Fitness training, or M-Fit, was introduced into the infantry training in Pendleton. Designed by former US Army captain Elizabeth Stanley, the program draws on a significant number of scientific research showing that meditation boosts the immune system, helps in dealing with depression, and regulates the brain’s mental and emotional health response.

3.      Meditation was  scientifically proven to be effective among Marines themselves.

The M-Fit program as it stands now can be traced  back to a practice among a group of Marine reservists training in Quantico, Va. who was preparing for deployment in Iraq around five years ago. The Marines participated in eight weeks of mindfulness course, at an average of 12 minutes a day.  According to a study published in the research journal Emotions, the Marines founds that they were able to score higher on cognitive and emotional evaluations and even improved in terms of their athletic performance, relative to Marines who didn’t participate in the program.

Stanley, who currently teaches in Georgetown School of Foreign Service says that meditation helps in ensuring that emotions don’t drive behavior and in increasing performance in highly stressful environments. Herself diagnosed with post-traumatic stress disorder, Stanley believes that meditation, and not medication, helped in dealing with her issues.