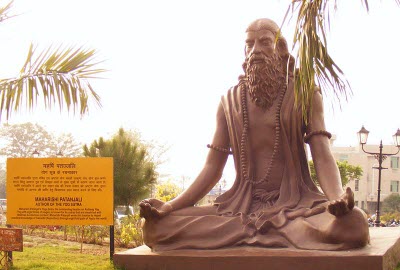 The relationship between meditation techniques and yoga has shifted and changed dramatically over the centuries.  In many ways, the wonderful spread of yoga to the West has been accompanied with what I consider to be an unfortunate focus on the physical aspects (asanas is the Sanscrit word for the physical postures) over the meditation aspects.

Patanjali is revered by all yoga teachers, even though he believed that the physica body was a burden to be overcome.

All modern Yoga teachers would name Patanjali one of their revered teachers in their lineage, but how many know that Patanjali emphasized meditation over asanas and believed that the body was a mere burden to be overcome!

Here’s a solid look at the relationship of meditation techniques and yoga from Karen Gram, writing in The Vancouver Sun.

Given the number of yoga studios in the West, we could be forgiven for thinking of the practice as our own. If you don’t do the downward dog, you probably know at least 10 who do. Indeed, some people say that yoga is more popular in the West now than it is in India.

We’ve got yoga for runners, yoga for lovers, yoga to release the tension in your hips. There are yoga studios everywhere offering hatha, kundalini, restorative, power and flow. At least 15 lineages are part of the modern yoga culture. We’ve come a long way from the ancient practice that began in India about 2,500 years ago.

“It was just meditation in its origins,” says Nico Luce, director of Y Yoga which is partnering with the Indian Summer festival to present yoga workshops this weekend. He says in the very early Vedic times, yogis performed rituals and meditation to attain the highest spiritual goals: self-realization, enlightenment and the liberation of the individual soul. The physical practice did not exist.

Since then, yoga has gone through several incarnations ranging from Classical to Tantric, back to Classical. Today classical still dominates the culture, but as more practitioners discover the Tantric philosophy, its popularity is growing.

For centuries, the philosophy centred around the separation of mind and body with the body considered a burden to overcome. Patanjali’s Yoga Sutra and Eightfold Path of Yoga define the classical period which emphasized meditation over asanas.

Tantric thinking on the other hand, believed the mind, body and spirit to be one unified force which was sacred. The physical practice was no longer to escape our reality. Tantra embraced reality and re-introduced the asanas or physical poses as an important part of the practice that also included breathing, meditation and diet.

Then in the 13th century, tantric yoga went underground as the Muslim and British invasions occurred in India. It didn’t come out into the sunlight again for centuries and there are still many texts that haven’t been translated.

Yoga returned to the classical philosophy with the father of modern yoga, Krishnamacharya who brought it back to the public in the early 20th century.

Krishnamacharya studied yoga from the monks living ascetic lives in caves in the Himalayas. When he returned to his home in Mysore, he started working for the royal family many of whom were ill. He taught them yoga and when they experienced the benefits, they decided to start a school and supported spreading the teachings.

Do you practice yoga?  Do you meditate?  I am interested in your opinion about meditation techniques and yoga.  Do you agree with my opinion that yoga has become toooooo focused on the physical practices at the expense of meditation?
I would love to hear your opinion on this in the comment area below.