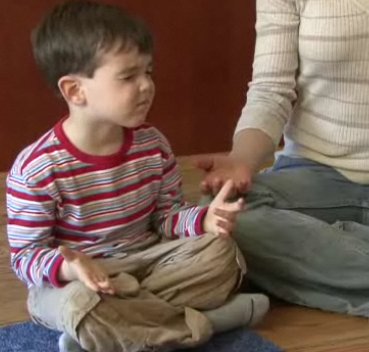 Teaching young children to meditate is becoming very trendy. Here are two methods that are great for pre-schoolers.

Meditation techniques for children are becoming very popular.  This brings up the question… should pre-school kids meditate?

Here are my thoughts on the matter.  Pre-schoolers probably don’t have the mental development to do long periods of concentration, and they definitely do not have the intellectual capacity to understand abstract principles associated with many schools of meditation.

But there are ways of making even the most abstract concepts become simple and fun… and those are the meditation techniques for children that can give them all the benefits of meditation.

Here is Gwynne Watkins writing for The Daily Beast on the growing ranks of parents and gurus who say meditation calms crazy-wild kids.

You could say that Amdo, a sweet, calm, and curious boy who lives in Brooklyn with his mother Jae, has been meditating since before he learned to walk.

As a toddler, he was fascinated by his mother’s meditation practice, and began to crawl into her lap and sit with her when she meditated in the mornings. Jae, a book conservator who’s been practicing Soto Zen meditation as a discipline for four years, soon begun giving Amdo gentle guidance on the principles of meditation, which he’s already applying to his life. “I tell him, ‘Feel what it feels like to feel a tingle in your fingertips,’” says Jae. “It’s not a technique, but you have to be really still (to do it). There was one time when I was really agitated, and spontaneously Amdo was like, ‘Mom, feel your fingertips!’”

One psychologist says that while “not all kids will be able to do meditation,” she’s found that “many kids” can “learn meditative breathing techniques that will help them regulate and not lose control.”

Merriam-Webster defines the act of meditating as “to focus one’s thoughts on, reflect on, or ponder over.” Which means that the definition of the opposite of meditation might be: “to be a toddler.” But some parents are embracing the idea that meditation can calm their rambunctious young children. For holistically minded moms and dads, it’s like a dose of spiritual Ritalin.

Parents apparently have a different visualization: serene, sedate children who learn to love an activity that keeps them quiet and still for long stretches of time. As such, many meditation centers have begun offering programs for children as young as 7, and meditation instructors tell The Daily Beast that there’s an increasing demand for courses aimed at the pre-K set.

And, perhaps surprisingly, experts say there are indeed elements of meditation that apply directly to the type of frustration that very young children are inclined to feel. “From 2 to 6, children undergo many changes and have little control over their environments,” says Dr. Jennifer L. Hartstein, a child and family psychologist. “Sometimes, their problematic behaviors are directly linked to that.” Although Hartstein says flat-out that “not all kids will be able to do meditation,” she’s found that “many kids” can “learn meditative breathing techniques that will help them regulate and not lose control.”

Even if your child doesn’t aspire to join a monastery someday, they can still appreciate the principles of mediation—or at least, you as a parent can. Renee Skuba’s son Lucien, who turns 4 in a few months, is what Renee diplomatically describes as “very active.”

“Maybe it’s because he’s a boy, or because we don’t have outdoor space,” she says of Lucien’s bouncing-off-the-walls energy level. “A city kid is different from a suburban kid.” To help Lucien cope, Skuba, a yoga instructor and musician, began doing breathing exercises and chants with him. “At nighttime, when he’s really active and not calming down, we’ll do sounds,” she explains, illustrating with hand motions. “Take a deep breath, fill up like a balloon—now buzz like a bee.”

Skuba goes through a small litany of sounds—bzzz, hisss, sssh, mmm—raising her arms with the breath, then lowering them with the sound. “When the breath is really short, the mind is really active,” she says, echoing closely what meditation gurus also recommend for adults. “This slows their breath.”

She’ll sometimes pull Lucien aside to take some deep breaths when playdates turn into wrestling matches, “and he’ll be ready to come back and enter from a more peaceful state.” Skuba and Lucien also do a yogic chant—the prayer of peace, love, and light,  in lieu of a lullaby.

The chanting, she says, makes bedtime a breeze by triggering a peaceful, sleepy state. “It’s like Pavlov’s dog.”

But what if you’re the type of parent who’s more inclined to relax with coffee and Mad Men than deep-breathing and mindfulness? Can you still teach your toddler to meditate in good conscience? Yes, says Anne Kenan, who teaches a meditation class for 3- to 6-year-olds at New York City’s Shambhala Center—but it probably won’t take unless you do it with them. “You don’t have to be a seasoned professional. You can start anytime,” she says.

And there’s no need to be too disciplined or structured about meditation when it comes to children. Her own son Rhese, 3, will only sit “for a minute or two,” but, she says, that’s enough. Original story here

“It’s more getting [your children] familiar with the practice of it. And practicing being still and being quiet,” she says. “They’re not meditating in the sense that they’re following their breath or using a technique. They’re just sitting there.

Which is great—that’s how you start.”

For me, the two main lessons were …

1. teach your child how to have control over the breath
2. chanting helps your kids control their mental states (and kids love repetition, so chanting is a natural for them)

Are you interested in learning more about how to teach your kids appropriate meditation techniques for children?  If you are, please leave a comment below and we will deliver lots more articles and videos on various ways to teach meditation to kids.