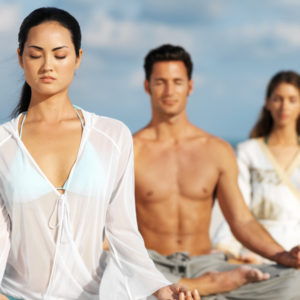 With the peace of mind and focus that meditation can bring about, no wonder it has become a central and essential part of many people’s lives. It has been depicted in movies in many forms, like in Little Buddha (1993) which told the story of Prince Siddharta who became the Buddha and showed the different forms of meditation. Meditation has also been glamorized in different movie genres, finding its way in movies like Star Trek. Tomb Raider, and The Last Samurai. No wonder there is a growing number of celebrities that meditate!

The Secret to Success: Celebrities That Meditate

The actors and actresses of these films are not only meditating on the screen. They are also meditating in their daily lives. Pretty Woman and Chicago heart-throb Richard Gere meditates daily. ‘It helps me set my motivation for the day,’ he says.  His passion for these issues has led him to advocate for human rights in Tibet and earned him good name in the process.

The action movie hero Steven Seagal, who specializes in toting powerful guns and blowing stuff up in movies  meditates regularly for peace in personal life. He says, ‘I have been doing serious meditation in my own pitiful way for probably twenty-seven years.’

While sharing her experience about meditation, Kate Bosworth of Blue Crush and Superman Returns fame says, ‘It’s just a really incredible state of mind. It’s just a beautiful place to try and be at. It’s basically about constantly growing and making yourself a better person and focusing on what you want for yourself and the world and really putting it out there. It’s amazing.”   (More here)

Even the Lord of the Rings and Pirates of the Caribbean heartthrob Orlando Bloom has turned to meditation to save him from a destructive path; he understands that meditation is about constantly studying and living a bigger life. Renowned golfer Tiger Woods has also turned to meditation in order to help him concentrate.

For the most part, many Easter personalities were responsible for turning Westerners to meditation, like Swami Vivekananda who, in 1893, delivered a powerful speech in the World Religions Conference in Chicago about Eastern meditation techniques.

Even rock stars have tried meditation, like The Beatles and Mia Farrow to name a few. Singers like Tina Turner, Leonard Cohen and Madonna have also turned to meditation to connect spiritually.

Politicians and writers also commit to meditation. Former PM Indira Gandhi of India always starts the day with half an hour of yogic meditation, and so does her granddaughter Priyanka Gandhi. Mao Tse Tsung of China, Nobel Prize winner Aung San Suu Kyi, and Indian Constitution architect Baba Ambedkar have all turned to meditation.

What do all these successful people have in common? Meditation. These people were able to get to where they are through no easy feat, but meditation did help a lot. Perhaps it’s about time you try it yourself.