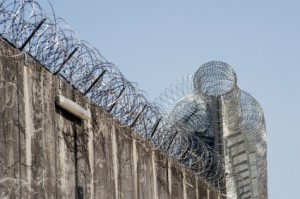 In studies around the world, people are questioning the purpose of prisons.  The age old question of whether the goal of prison is to rehabilitate or punish is constantly renewed.  (Recently, the State of  Texas announced it was scaling back on prisoner meals to save money to wide-spread praise.  One prison that has an excellent track record in helping prisoners is in Kenya where prison officials teach meditation techniques to help prisoners.

The Kenya Standard relates the story of Sonal Nagda who her job as a social worker to work full time at helping prisoners utilize meditation techniques to change their lives.

Her number one goal is to teach the prisoners to use meditation to lower stress.

Life at Kamiti Maximum Prison moves slowly and mechanically. Inmates follow their chores like clockwork, but in no hurry. After all, most of them are serving life sentences while others are there for more than ten years. Yet others live in seclusion, in death row.

One such man, Brian Kariuki, has served five years of his life sentence. In an interview with Presstv, Brian, who was a student at Nairobi Aviation College before his arrest, says he harboured deep-seated anger against the people who accused him of the crime he is in prison for and which he maintains he did not commit.

“I would get really mad and even have nightmares,” Brian said, face contorted with feeling. But now he says he has found the perfect remedy; the air. “Every time I get angry, I breathe in and out,” he says.

The remarkable transformation that has helped Brian and other inmates accept their circumstances and learn to forgive, blew their way when they accepted a course with the Art of Living, a global not-for-profit organisation engaged in stress management and service initiatives.

Sonal Nagda of Art of Living-Kenyan Chapter quit a job she held for 26 years to champion the organisation’s roots in Kenya. One of the initiatives is the specially designed prison course, which is also given to street children.

“We teach them simple techniques to help them deal with stress, including long deep rhythmic breathing, yoga and meditation,” says Sonal.

The rhythmic breathing technique, says Sonal, is known as sudarshan kriya and it gives oxygen to every cell of the body, leaving one feeling more relaxed.

When Sonal, a third generation Indian born in Kenya started the courses at Kamiti, there was resistance from the prison officials and the prisoners. They thought Art of Living was a religion.

James Mwangi, another inmate serving a life sentence at Kamiti and a beneficiary of the course, says: “Initially, I thought the school had something to do with religion, but I have found out it is not.”

James, who is asthmatic, says that before the course, he was also suffering from ulcers but now he does not need much medication.

“The course teaches us how to manage our bodies, making use of the free air nature has given us,” James says.

For the prisoners, the long, idle hours and the drag of a life that never changes leaves them with only one thing — many thoughts. They worry about the families they left behind and their pending appeals and, ultimately, these lead to stress. Almost every prisoner says they have ulcers.

Vincent Ayuma, an inmate serving a life sentence and also living with HIV, told this writer that initially, he thought he would never survive his double tragedy. Then he mentioned in passing about the Art of Living.

“I did this course and from it, I have learnt to deal with my stress,” he said.

The Officer in Charge at Kamiti Maximum Prison, Joshua Maweu, concurs: “Those who have undertaken the course are positive about life.”

Citing researchers, Soal says that breath is the link between the mind and the body and each emotion has a distinct breathing pattern.

“Sudarshan kriya employs skillful breathing techniques, which we can use to change the way we feel by releasing negative emotions, leaving you energised, relaxed and happy.”

Sonal, a statistician, says she was introduced to the Art of Living a few years back though she did not take much notice. But in 2005, she started doing volunteer work with the organisation. The prison workshops began in 2008.

While working at International Livestock and Research Centre (Ilri) as a research data analyst, it came to a point where she started questioning life and her place in it.

“It was great working at Ilri who I still consult for. But at some point, I felt I needed more out of life and in as much as I loved my job, I quit in May and decided to concentrate on social work that would touch people positively.”

She has been the Art of Living trainer since 2009 and its secretary here in Kenya. Sonal has no children of her own but with Art of Living, she is working closely with Children’s Garden Home to see how best to make the home more self-sustainable.

“We also have Art of Living volunteers who come from abroad and spend two to three months at the home,” she says.

The organisation also conducts the course to willing individuals and groups and it takes about a weekend with follow ups for maximum benefits.

The Art of Living was founded in 1981 by Sri Sri Ravi Shankar in India and it operates globally in 151 countries. Sri Sri’s philosophy guides the organisation and is based on peace. He believes that; “unless we have a stress-free mind and a violence-free society, we cannot achieve world peace.”

“This makes sense,” counters Sonal. “Stress makes people react to their emotions, which leads to violent behaviour. I hope we can reach many people with the practical lessons.”

Sonal says that the Art of Living has made her stronger and more focused in life. She is also healthier and more in touch with the society, hence the more reason she wants to give back.

It’s no secret that people in the United States would probably laugh if you spoke about meditation techniques to help prisoners. But in other countries including India and Thailand, they take rehabilitation much more seriously and meditation is an important part of the process. If prisons teacher the prisoners how to use meditation to relieve anger, stress and tension, it’s understandable that they would