You probably know that Katy Perry was recently divorced from Russell Brand.  His meditation techniques to cope with divorce are the kinds of simple meditation methods that you can learn in an hour, and get relief within a week.

Russell Brand uses the Transcendental Meditation Techniques to deal with the stress and emotional pain of his divorce.

Here’s a wonderful quick little video I just found. Russell Brand opens the Change Begins Within event, a benefit for the David Lynch Foundation, with a brilliant stand up routine. He also tells us the story of his learning and practicing Transcendental Meditation.

Not only is it hilarious …. it’s a wonderful set of insights into what it’s like to learn meditation.

Here’s how The Sun first reported the story …

His divorce finalises in a couple of weeks and Russell Brand admits he’s never been happier. 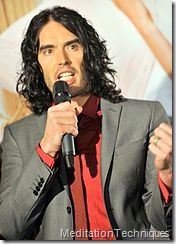 And he said transcendental meditation has helped him through his break up from Katy Perry because it’s allowed him to “tune into a higher consciousness”.

The comic split from the singer at the beginning of the year after 14 months of marriage.

They divorced in February and it finalises in July.

He’s since been linked to a string of women including wannabe TV host Emily Hartridgewhile Katy has been stepping out withFlorence + The Machine guitarist Rob Ackroyd.

And despite a rather awkward appearance on The Graham Norton Show last week, Russell said he’s the happiest he’s ever been in his life.

Russell Brand, His Meditation Techniques To Cope With Divorce

He said it’s all down to meditation which is his version of having “a fag or a drink”.

“I try not to compartmentalise things too much into years, but generally speaking I’m happier than I’ve ever been in my life,” he said.

“I’m dedicating myself to all sorts of interesting things you know.

Transcendental Meditation Is Easy To Learn

“Transcendental meditation, kundalini yoga, these things are right good for the old spirit.

“TM really works you know, it’s good for your health – both mental and physical.

Russell continued: “Tune yourself into a higher consciousness, that’s what I say. Change the dial.

“It’s easy. You just say a word over and over again in your head, they teach you how to do it. It’s easy. It’s mantra meditation. Anyone can learn to do it and anyone should.

“You can just use it to have a relax instead of having a fag or a drink, or you can use it to connect with a different form of consciousness.

Just like Russell Brand did, you too can learn meditation techniques to cope with his divorce…. or your problems and worries too.

Would you like a quick little lesson on mantra meditation the will hope you cope with fear, loss, and emotional pain?

If so, please leave a comment below telling us what sorts of things you are dealing with.