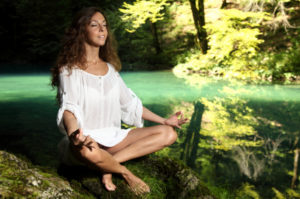 Come to think of it, it’s more or less what transcendental meditation is about. Centered on meditating as you repeat a mantra to ultimately induce a feeling of calm, the practice has also been a hit among people like Oprah, David Lynch and Candy Crowley.

Although meditation may not make everything better, it has been demonstrated to have a number of mental and physical health benefits, including lower stress levels, greater success achieving weight-loss goals, improved focus and better grades, and a lower risk of depression among adolescents and pregnant women. Transcendental Meditation in particular has been linked to lower blood pressure, reduce risk of heart disease and enhanced longevity.  (Read more here)

It may be hard to believe, but TM has been instrumental in positively affecting people’s lives, so much that it leads to seemingly unrelated goals such as weight loss and even better grades.

One of its foremost advocates, David Lynch, even started the David Lynch Foundation for Consciousness-Based Education and World Peace, aimed at educating others about the merits of TM.

Lynch himself said that TM is capable of driving away negative feelings, such as stress, tension, depression, bitterness, selfishness, and sorrow. As for Candy Crowley, she attests that TM helps in handling stress and coping with negativity.

But don’t just take the word of these celebrities for it. You should try TM for yourself and realize how transformative and, as its name suggests, truly transformative it is.