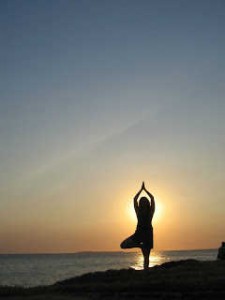 Yoga for healing violence and crime

At a time when violence, poverty, and drugs are prevalent in South Jamaica, Queens, rap music became a cultural movement that influenced fashion, style, and language. Notable personalities like LL Cool J and Tupac Shakur made it big with this background, and Erica Ford was there to witness it all. Having worked with gang members as early as 1987 and with the likes of Tupac Shakur in 1994, Erica is the brains behind Life Camp, a non-profit program that aims to drive young people away from drugs and gangsters through methods that include yoga for healing.

Erica herself has witnessed the frustration, sorrow, and anger of people who’ve lost their loved ones to violence on the streets. With Life Camp, Erica helped open opportunities for the disadvantaged youth. Some of her programs include a forgiveness dinner for the mothers of children who died because of street violence, a gathering of ex-gang members to pep talk the youth, and a special program called ‘100’, composed of 25 parents and 75 kids who have witnessed crime and violence.

One of the initiatives of the ‘100’ is a meditation and yoga class, which is capped off by a discussion of writings of famous leaders like Gandhi and Martin Luther King.

This program as then extended to the Life Camp, to make way for a greater number of young people who can benefit from yoga’s healing principles. Recognizing the positive effects of meditation in easing hypertension and healing trauma, meditation has been made relevant to the youth through the introduction of hip-hop yoga.

Yoga for healing violence and crime

The second idea was Hip-Hop yoga: to use culturally relevant music to help draw kids into a yoga practice. Using music with yoga is of course not new. There are many teachers who regularly use music to set mood and tone. There are classes taught that make copious use of top 40 and current music — and of course many teachers who remain purist, and whose classes are silent save for the sound of breathing. Hip-Hop Yoga would distinguish itself from the other music-based classes through the combination of original music with inspirational lyrics, all written by the kids based on their experiences in practice.

Music has historically been a unifying force in ancient and modern cultures around the world. National anthems are based on a collective display of pride and strength; shamanic songs are used to access the spiritual world; the ancient Vedic mantras are to this day chanted in groups, large and small, to reinforce a tonal pattern that purifies memory and allows access to pure consciousness. Popular music can set a tone for an entire generation, the songs we remember that define our coming of age, for example.  (Read more here)

When a person experiences a traumatic event, their neural pathways become damaged and a hardwired memory of the painful experience is planted deep into a person’s subconscious. Meditation helps in healing these deep-seated painful emotions by creating new neural pathways over the broken ones.

Aside from the scientific basis of using yoga to heal people, it’s also a lot of fun! For instance, young people compose lyrics based on their experiences and the sayings of spiritual leaders say. In the program, the format of Ashtanga Yoga was used. At first, the basic movements are taught so the participants can get familiar with the breathing and movement patterns until they go on to the more complex movements, still inspired by yoga.

The effects have thus far been successful. Juquille and Tyrell, both of whom lost their dads to crimes and street violence, attest to the empowering effect of yoga. Now, instead of turning to gun violence, they feel a sense of empowerment, an awareness of their sense of self.  Yoga’s healing power has done it yet again.